Can anyone help me with the date and origin of this fragment please.  It looks to me to be from

an 11/12 C gradual, with its Carolingian script and adiastematic neumes.  It’s the introit for the Easter Sunday mass.  Approximate size is 310 x 210 mm.

However the initial is more of a foliate design than the knotted St Gaul ‘R', and I know little of the chronology of illuminated initial design. 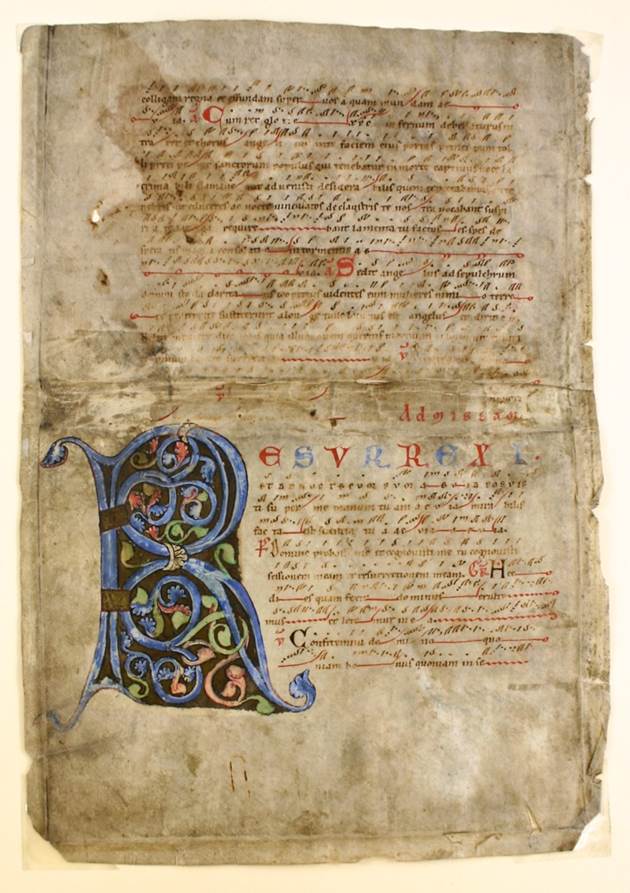 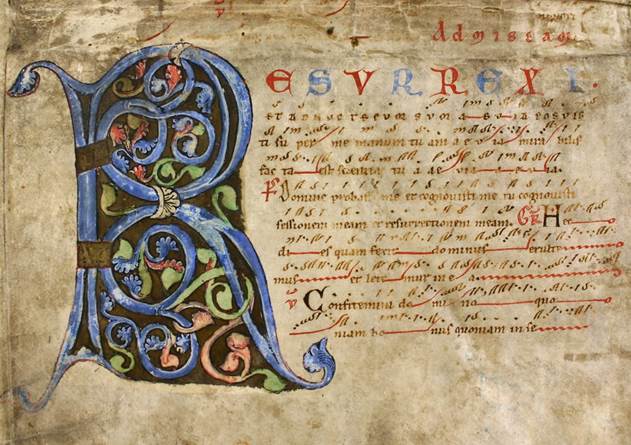 Please apologise, if my "offerings" here are not on that level, although I try my very best ;)

But thank you very much for pointing out this interesting publication of yours.

The point is just that there is a fine but critical line between gift transactions and commercial transactions.  I have no problem with Andrew's asking price, purely as a commercial decision. But I can see Miguel's point that something like that may sour the spirit of this forum, in which people share knowledge with no thought of monetary gain.  Nobody likes to give something for free only to see somebody else make a profit of it.

Generally speaking I think it's important to charge money in the right context, not for the sake of the money, but because it clarifies the terms of the transaction.  If you offer a lecture for free just to be a nice guy, you'll quickly discover that you're expected to bring your own sound equipment and to make your own travel arrangements, book your own hotel, etc.  If you charge $300 (which is a paltry sum compared to what a musician would typically ask), everything else you request will be gladly taken care of.  If people don't want to pay the $300, then that's clarity right there: you're better off not doing the lecture in the first place.  It doesn't matter whether you ask $300, or $100, or $1,000.  It's the principle that matters.  Recently I got a request from a local church to deliver a lecture on Luther and music later this year.  I have taught on that subject so often, and have so many powerpoint slides that I've made over the years, that basically I could pull together a lecture in half an hour and deliver it this afternoon.  For friends and colleagues I would do that for free, any time, with pleasure, because it's a fascinating topic.  But with people I don't know there have to be ground rules.

So I suspect that this is what made the whole thing dicey for Miguel: somebody who'd be in it to make money would be an interloper in this forum.  I don't think Andrew is.  But there may well be a point, Oliver, where your valuable expertise, for example, ought to be duly remunerated, and that's the point at which the discussion about a fragment like this would need to be continued outside this forum.

It seems here in Italy you are well adviced not to rely on the given infrastructure (which forces you to carry your own equipment around), but the fact that the government is so afraid of education points also at the real value things have, despite the undecent wages they are ready to pay (as well as school teachers in certain districts of Naples, who go without any payment on the streets, because it is the only place to meet those students who will never attend school because they are forced to “look after their families”). I know, nowadays titles such as “university of excellence” suggerate that belonging to the ruling elite is all what matters in the academic world, but this would in fact turn us into Philistines who devaluate culture by our intention to exchange them for a better social status (at least at universities founded during the 19th century for very idealistic purposes like the Humboldt-University, although it was originally called Royal University, I would appreciate, if the staff there recalled certain concepts by Wilhelm von Humboldt, since it would make them think twice to accept such a hypocritical “distinction”). According to Hannah Arendt's analysis, it is the wrong attitude which creates an “education proletariate”. Therefore we should never be afraid to be clear about our real place we should have in society, it does include that we do not avoid the sour subjects!

Maybe if Andrew did ask me to prove that this manuscript is not a fake, I would apply to certain rules which you alluded to. I am just here to learn from each other like most of the inscribed members (and with respect to Miguel’s researches I certainly did). I do know that only a few colleagues rarely mention in their lectures about music history, how long St Gall neumes in campo aperto had been used in certain corners of the German speaking territory (while in others not). It simply means that Andrew’s fragment is not that Carolingian as it seemed to him, since it was written later. I am glad that you did appreciate this exchange, but you should also have a look at the groupe “German music”, where I announced Stefan Morent’s contributions about the musical life at monasteries near Lake Constance until the 18th century. I think you need to be in a very provincial place to understand this very particular imagination of an urban musical taste, but unlike market values such details do not harm the value of heritage, even if the manuscript might hardly be called “Carolingian”.