Merci Dominique!
Vraiment c'est le Beneventan music script, by and large... on the top of NON-Beneventan textual script! All the scribes working under this mixture premise do not bother much about directionality (Kelly's so called 'punctum rule') although the ductus and overall functioning are still classic Beneventan.

This particular source is almost identical to another Franciscan breviary now in Naples, Bibl Naz VI E 43 (I'm attaching a tiny snippet from a pic I took for personal reference a while ago, I wouldn't like to share more due to infringments and stuff). The only differences I can see are relatable to the Naples ms ductus being more angular and stylized, both text and music. 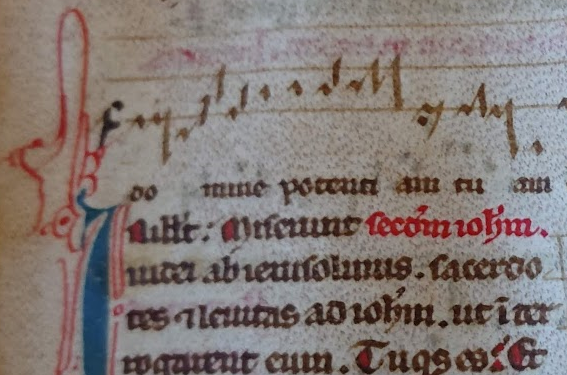 These two mss are likely testimonies of the Franciscan-leaning chantbooks reform of Nicholaus III. Boe touches upon this story en passant in his Roman notation essays and I'm working upon expanding it. It's cool stuff...

then the same reasoning for the breviary of the "Sacro Convento di S. Francesco"

Yes Dominique, I agree this is one coherent group (and one almost completely unstudied from every musical point of view), although if the oldest of the three Assisi mss is dated 1224 as I read from the description, then it antecedes Nicholaus III's reform of around 1280--its rounder looks match the earlier date, too.

Yes the Assisi 693 musical scribe writes to a style closer to what's currently called Nota Romana and regardless, he is a bit sloppy often correcting and/or drawing the same line twice: one might fantasize it is so because even Franciscan monks working in the Assisi casa madre were still by that time not that much of skilled neumators? :)

Oliver, I have almost no doubt that the practice of writing music in Central and Southern Italy originated in Beneventan milieaux (and by 'Beneventan' I include the areas across the Adriatic, too). Therefore it makes sense to me to assume the Beneventan musical script as the root of all the branches we're seeing here.

Exactly the reason, why I am not so happy with it, not that I want to question that scriptoria around Benevento were using that script. We should also bare in mind that they strongly identified with Ambrosian, although the latter has their own script and notation, in some cases even with Byzantine culture.

I founded here the group about Italian chant for the very same reason.

And if you look at the architecture it is also striking, how many aspects they have in common (just think of churches in Apulia, Marche and Istria) and what is different:

But I think the discussion is more about that most of the areas in question have their own custom and such a diversity cannot be simply subsummed as Roman. What is even more irritating, that during the 11th century, when Montecassino became really important, a lot of abbots were educated in a German speaking area between Alsatia, Baden and Switzerland and they became pope afterwards. The Beneventan Desiderius was rather an exception, although a very important one!