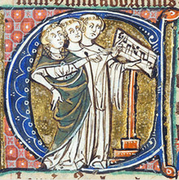 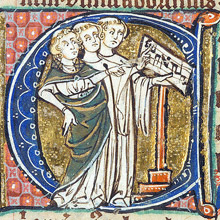 The conductus, setting Latin poems to freely composed music, appears as one of the most important and exquisite types of song developed in Medieval Europe. Its corpus presents sophistication and technical wizardry of poetry and music, and its texts explore a variety of religious, moral, and political subjects. Although the largest group of conductus that have come to us is monophonic, many of the surviving pieces are composed of two, three and even four voices. Since its corpus has been preserved in manuscripts found from Scotland to Southern Rhineland, and from Spain to Southern Poland, we can surmise that this type of composition was a true pan-European phenomenon.

The Conductus Workshop, directed by the musicologist Mark Everist and assisted by the prestigious medieval music singers John Potter, Christopher O’Gorman, and Rogers Covey-Crump, is designed to give students an insight into how the monophonic and polyphonic conductus were created and performed. The workshop opens with a description of the repertoires, and an examination of their functions and styles and their historical context. It continues with the study of how the conductus was composed, how to decipher its medieval notation, and how to recreate its performance: rhythm, phrasing, tuning, and collective singing (up to three parts without conventional metrical rhythm).

At the end of the first day of the workshop John Potter, Christopher O’Gorman, and Rogers Covey-Crump will present a concert of the repertoire. The Workshop will close with a short student presentation of the pieces studied.

This workshop and concert event is the result of research conducted at the University of Southampton between 2010 and 2014, supported by the Arts and Humanities Research Council and entitled Cantum pulcriorem invenire: Latin Poetry and Music, c. 1180 to c. 1320.