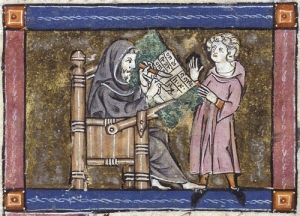 The understanding of the various languages of the Western Middle Ages is crucial for anyone attempting to reconstruct the performance of medieval music. In verse form, the medieval languages emerged as the main shaping element in the configuration of the medieval song. At the same time prose language was used by medieval writers to record musical events and to communicate ideas about music composition, aesthetics, and performance.

During the course students will:

As a final project students will produce a translation with commentary of brief passages from the Parisiana poetriaof Johannes de Garlandia (c. 1234), and De musicae of Johannes de Grocheio (end of 13th century), and a stanza of one of the songs from the Carmina Burana collection.