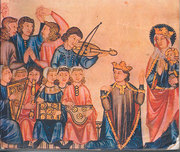 The 2014 Early Music Course of the Music Festival of the Pyrenees will be devoted to the study and performance of the medieval song. In this edition the course explores the 13th-century repertoire of the so-called "Cantigas Montserratinas": a group of 12 Cantigas de Santa Maria of Alfonso X "the learned" that specifically describe miracles performed in Catalonia by Santa Maria de Montserrat. An appropriate performance of this repertoire will be attempted by conducting a thorough study of the pieces' historical context, music notation, language and rhetoric; by analyzing related literary and iconographical sources; by consulting recent musicological studies on the subject; and by applying suitable tuning, phrasing, and ornamentation.

The course is open to singers of and instrumentalists: vielle, psaltery, harp, medieval transverse flute, hurdy-gurdy, citole, medieval lute, medieval bagpipes, portative organ, and percussion (The main tuning for the course will be Pythagorean in 440Hz).

For its specialization the course is open to only a maximum of 8 participants. These students should have previous solid experienced in the field of medieval music.

RSVP for II Early Music Course of the Music Festival of the Pyrenees “The Cantigas Montserratinas of Alfonso X” to add comments!

Registration until the 15th of march only!