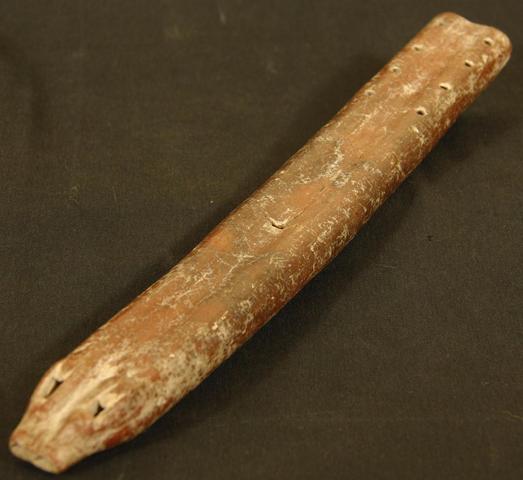 Does 250-100 ap. J.C. mean 250-1000 of our era? In which case it's about right. There are quite a number of double flutes of pottery from the area of that age, as well as later ones. The later ones tend to be more decorated.

Musically speaking, it's nothing like the European ones. The bottom two holes will have practically no effect on the tone. The second pair by the look of it will only produce a semitone higher note.

There is a very interesting book on South American pre-Colombian musical instruments, that goes into the tonal systems of that area (not quite the same as this, which I suppose is Mexican, but not that far removed).(Dale Olsen: the music of El Dorado). Why I mention this is because in his investigation of hundreds of flutes he found that there seems to be no attempt at any kind of musical scale as we understand it to have been made.

To sum up, I think it's genuine, and the date is right...Of course, it can be a well-made fake, but in that case more than probably based on a real original.

Do we know the geographical origin?

Could it be a funeral instrument? If the instrument is not destinated to be played, maybe  it could explain the question of the last holes?

I contacted the private collector of musical instruments and owner of the Museum Vosbergen Dick Verel at Eelde (prov. Drenthe, Netherlands http://www.museumvosbergen.nl/museum.html , in Dutch only). He also recognised the instrument's provenance: it is originating from the Indians in the Colima region, Mexico, about 200 Christian era. They were found as grave gifts. The Museum Vosbergen has got 4 specimens, so this type of instruments is widespread, Except the rumbling pot I do not know Western European historical musical instruments made of earthenware.