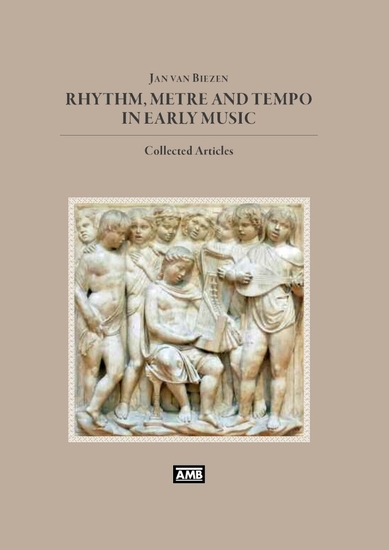 In this volume Jan van Biezen brings together 12 articles he published between 1959 and 2007 on aspects of tempo and rhythm, especially in Byzantine and Latin hymns, hymns of the Reformation, 15th century songs in ‘stroke notation’ and in the organ works of Bach.

His most important discovery was that the Byzantine kanons and stichera in principle had a binary meter. that fact had hitherto been obscured by an incorrect interpretation of the rhythm of the various neums by leading byzantinologists. The rediscovery of the original rhythm and meter of Byzantine music and Gregorian Chant is not only a matter of pure scholarship. The expressiveness, the sense and the beauty of these hymns is optimally revealed only when one returns to the original form of the melodies and to see this achieved in practice.

The original articles in Dutch, German or English are reproduced here each one preceded by a summary in English. As a good teacher Jan van Biezen exemplifies his ideas widely in musical notation. This makes his writings on rhythm, metre and tempo in early music collected here highly accessible for the interested musicologists.

This book contains the most important articles that I have written over the past fifty years. Almost without exception, these articles treat aspects of rhythm, meter and tempo in diverse types of music, from early ecclesiastical chants up to and including the organ works of Johann Sebastian Bach. It is in this field that I have made the greatest number of discoveries and have been able to make a contribution to the progress of musical knowledge.

My most important discovery was that the Byzantine kanons and stichera in principle had a binary meter. That fact had hitherto been obscured by an incorrect interpretation of the rhythm of the various neums by leading byzantinologists. I discovered this when I studied the notation of the famous Resurrection kanon of Johannes Damascene from ca. 1150, found in codex 470 of the Iviron monastery on Mt. Athos. The results of this discovery were formulated in a coherent theory in my dissertation of 1968.

A related discovery was that a consistent rhythmic interpretation of the neums in the socalled codex hartker of ca. 1000 shows that certain groups of office antiphons answer to the same metrical rules as the Byzantine stichera, a related genre. The very same rule appeared to be valid for the choice of the long or short value of the accent-bearing syllables.
This is in my view a convincing proof of the fact that the office antiphons also were originally ‘mensural’, i.e. they had long and short note values in diverse categories. It then seems reasonable that this is also true of the more melismatic antiphons and responsories of the mass. It was indeed possible to formulate a consistent theory for the rhythm of these chants based on the notations of St. Gall and Laon from the 9th till the beginning of the 11th century, with as essential supplement the notation of Nonantola on the four extant folios from the 10th century.

A third discovery was that there is a certain regularity in the stroke notation in the Gruuthuse manuscript from the last quarter of the 14th century. That meant that the customary metrically arbitrary transcriptions of the melodies could not be correct. The discovered regularity is essential for approaching the original form of the melodies.

My earliest article in the field of rhythm and meter concerned the 16th century Genevan psalm melodies. For the planned Dutch rhymed translation of the psalms that had to be sung to these melodies it seemed useful to study their superficially rather irregular rhythm. I discovered that there are certain norms, provided that one excepts some ten melodic lines in this large corpus of hymns. I was able to clarify the cause of the rhythmic deviation of these exceptions, and pointed out to the poets of the new rhymed translation that they would be well advised to take note of this, to avoid doing violence to wordtone relationships.

My method of work is probably strongly influenced by my mathematical background. I attempt to achieve the maximum with minimal resources and to find the simplest possible proof for something. My theories are usually based on certain significant facts, on certain regularities that cannot be coincidental. I highly value the objectivity of the facts. A good theory is characterized by simplicity and coherence, uniformity and consistency. In musical matters it is important to look at the large picture first, and to attend to the details in a later stage. Of course, practice plays an important role: a relevant theory is only acceptable if it leads to convincing musical structures.

For me the rediscovery of the original rhythm and meter of Byzantine music and Gregorian Chant was not only a matter of pure scholarship. I am convinced that the expressiveness, the sense and the beauty of these hymns is optimally revealed only when we return to the original form of the melodies. I would like nothing more than to see this achieved in practice. For this reason I noted in my dissertation the wish that this study would lead to a return of the Byzantine melodies there where they belong, in the Greek church, in their complete and unalloyed beauty. And for Gregorian Chant my singers and I were able, during the seven years that I led a schola, to experience how a more ‘authentic’ manner of singing improves the connection between text and melody. My study of the tempo of the hymns of the Reformation must also be seen in this light.

It was my goal as musical editor of the Liedboek voor de Kerken [Songbook for the Churches], which was published in 1973, to restore the original luster of the old melodies as much as possible, and to find a notation that enables to show their various tempi. I wrote in a Festschrift for the hymn poet and hymn translator Jan Wit: “Let us sing a Genevan psalm melody as in Calvin’s day, a Lutheran hymn as in 16th century Wittenberg, a melody of Crüger as a 17th century figured-bass song and an English hymn or a melody of Bastiaans as would have been customary in the last [i.e. the 19th] century”.
The increased value that a return to historically informed performance practice provides is however not limited to congregational hymns, but can be observed in all music. For this reason I also cooperated enthusiastically with the ‘early music’ movement. My study of the tempo of baroque music is a result of this enthusiasm. unfortunately this subject is still topical. The notion of a norm which was accepted at that time, a ‘tempo ordinario’ from which slow and fast were derived, has apparently been lost. At many performances of fast movements of sonatas, concerti and suites from the baroque, I have more the feeling of attending a sort of Olympic Game than a musical event.

In conclusion, I want to thank a number of people who have helped me during the process that led to the publication of this book: Rien Aerts, who about ten years ago suggested to publish my most important articles and Greek icons on the internet (www.janvanbiezen.nl); Erik Gevers, who offered to do this publishing free of charge. This was an extremely time-consuming task given all the complex musical notations in the text; Bob Tempelman, who introduced me to Odette Koldewey after I had expressed my wish to bundle these articles in a book, to be published in limited edition for my family, friends and former colleagues; Odette Koldewey, who was, due to her extensive experience, the right person to edit this book, using the material provided by Erik; Ben van den Camp, the publisher of this book who was willing to publish it on a larger scale than originally intended.