Also concerning the book kontakarion the collection of Sinai is exceptional, since it has a great variety of books which has only recently be studied by musicologists as well. Especially the unnotated kondakaria-tropologia are interesting, because they prove that the genre kontakion was continued with new poetry, obviously in a rather monastic context. The poets used the well-known models to compose new kontakia-prosomoia, also about the feasts of the model (see alternative kontakia-prosomoia also for the first day of September…).

Centres to preserve the old books of the cathedral rite notated into the sticherarion notation (outside Constantinople) were Athos, the island of Patmos, and the scriptoria of the Italian Archimandritates during the Staufer period (especially SS. Salvatore di Messina) and Saint Neilos' Abbey at Grottaferrata, but also Sinai.

X • Kondakarion without notation organised as menaion (September-August ff.1r-96v, part between July and August is missing between f.94v and 95r), triodion beginning with Sunday of the Prodigal son (ff.96v-103r), preceding the one of Meatfare (Apokreo) which is still written within the menaion of February like all the other kondakia of the triodion except that of Lazarus Saturday until Palm Sunday (f.73r-89v) and pentekostarion beginning with Easter and ending with All Saints (ff.103r-114v) and followed by acrostics made over the prooimion of the kondakion, which was later used for Palm Sunday (but not in this kondakarion). The manuscript has an appendix with pages of on older kondakarion-tropologion witten in majuscule script (ff.117r-118v), while the empty verso page of folio 116 has an alternative kondakion for Symeon, probably a prosomoion of common kondakion in the same echos.

Most of the kondakia have 4 oikoi, those of the triodion 6 or 8, there are two kondakia for the Sunday of Orthodoxy, one dedicated to St Theodore Stoudites (3 oikoi), another to Orthodoxy (only one oikos), there are also many kondakia dedicated to saints which do not appear in the later notated kontakarion-psaltikon. The Akathistos was compiled from another manuscript which arranged the 24 oikoi of the kontakia rubrified as stichera alphabetika (ff.80r-87v). Many prosomoia of the triodion are different from the later repertoire. The tropologion was torn into two parts within the menaion of April (fol. 1) Beginning of the month of February with a kondakion for the Holy Martyr Trifon (1 February) composed over
the kondakion for All Saints Ὡς ἀπαρχὰς τῆς φύσεως (f.143r) 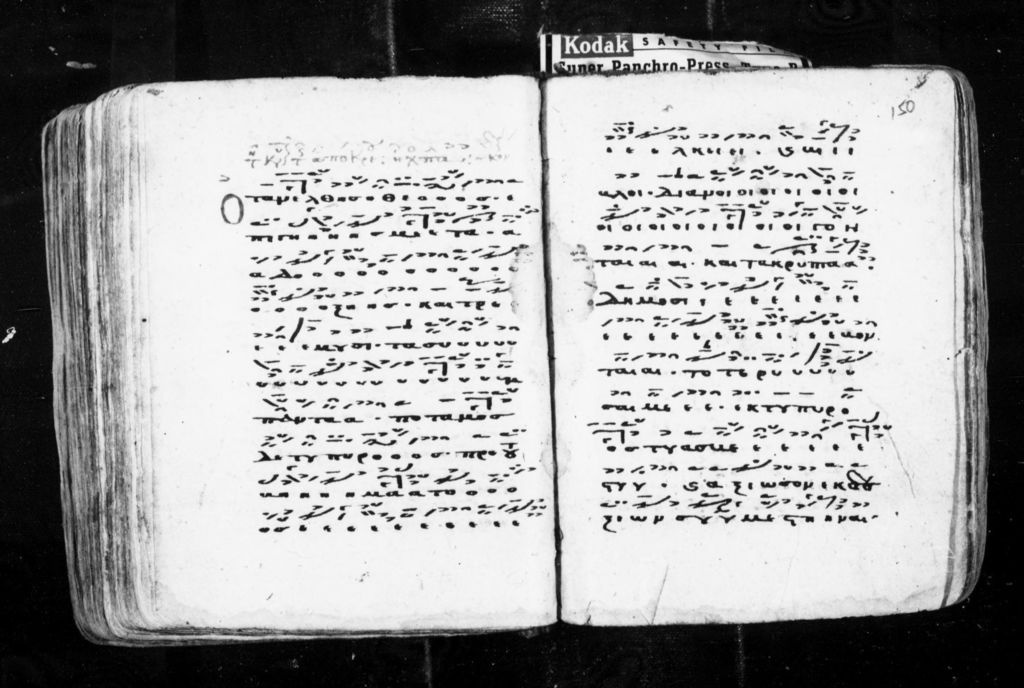 On folio 83r another anti-cherouvikon for the Presanctified liturgy and the kekragarion (evening psalm) were added (compare with folio 21 recto), but without modal signatures. 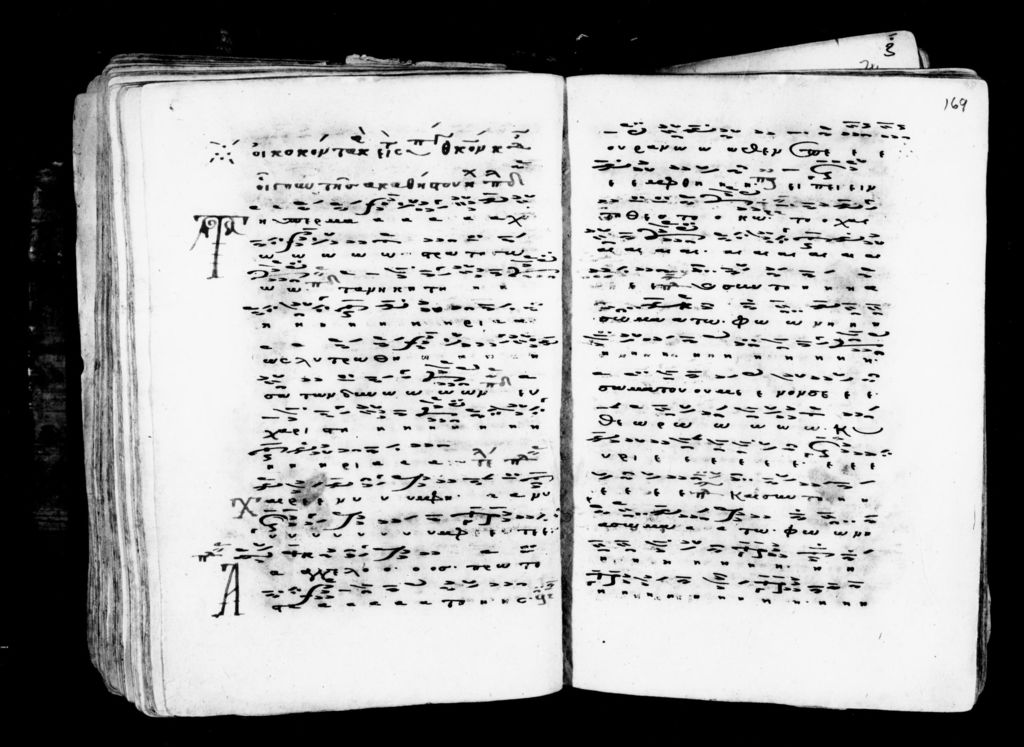 Melismatic elaboration of the whole Akathistos hymn (kontakion for Annunciation, 25 March)
after the copy of the psaltikon-kontakarion Sin. gr. 1280 (f.168v)

The manuscript is obviously a later copy of Sin. gr. 1280 which the scribe followed in the very detail (Floros commented on the great number of errors he found when he studied this copy), but he omitted the stichologia for Christmas and Theophaneia and the rubrics with the refrains notated in red ink before each echos of the allelouiaria. He added the missing prosomoia cycle of eight kontakia anastasima, also the eleven stichera heothina (which is odd for a kontakarion), and an allelouiarion cycle for psalmody!, and a complete highly melismatic, but not kalophonic version of the whole Akathistos hymn (both after a kolophon where 1280 was finished). The notator used a rather contemporary way to write medial signatures which are very rarely used in Sin. gr. 1280, another hand copied the version of the Akathistos like on f.110v and added the other 23 oikoi in the same (highly melismatic, but not kalophonic) style. XV • "Psaltikon of Ioannikios of the Holy Mount Sabas". Some chant of the Asma has been added on its first pages (acclamation τὸν δεσπότην, trisagion, prooimion of the Akathistos hymn, a repeated passage taken from a doxastikon idiomelon for 15 August, obviously belonging to a kalophonic realisation of the same) which have been used to bind two older manuscripts: 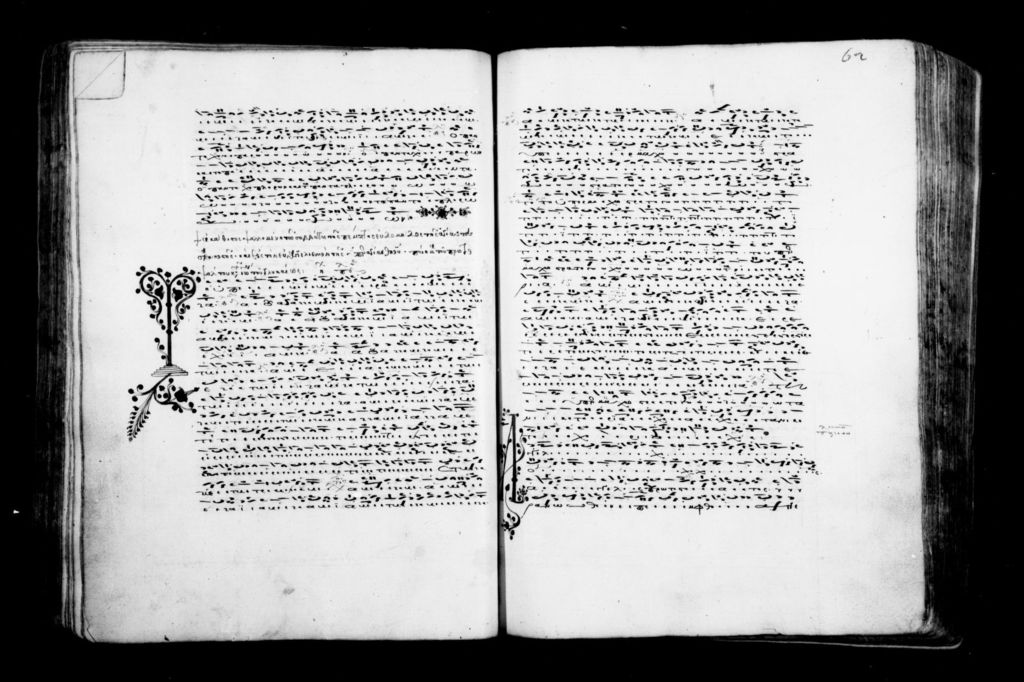 The manuscript was bound at the scriptorium of the Great Lavra and sold by Gerasimos to the Akataleptos Monastery. Unfortunately the microfilm (of some pages) is in a very bad and almost unreadable quality (low resolution), although it was written by a very clear hand. The manuscript shows that Michael Aneotos reduced his composition of the prooimion to the incipit (obviously the rest was supposed to be sung by the choir). Thus, he did a first step which led to the book form oikematarion whose name indicates that the first oikos (not the prooimion) was the main subject of his arrangements (Ioannis did also embellish some prooimia with teretismata).