I would like to announce the publication of the Proceeding of the recent International Symposium 'Musica e liturgia a Montecassino nel medioevo' (Music and liturgy at Montecassino in the Middle Ages).

The Publisher has reserved a 15% discount for purchase on their site. 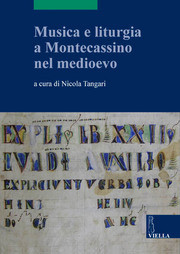 The Abbey of Montecassino has been for centuries the center of development and spread of particular traditions in music, liturgy, literature, paleography and art. Even today the monastery, with its remarkable collection of books, represents the cultural history of southern Europe from the high Middle Ages to the present day. The studies on liturgical music in Montecassino have received over the past twenty years a considerable increase both in quantity and with respect to research topics, which were extended to include the history of liturgy, musical paleography and textual criticism. These investigations have opened up new questions and new areas of research, which in turn call further investigation.

This book contains the papers read during the International Symposium “Musica e liturgia a Montecassino nel medioevo” which was held at the University of Cassino from 9 to 10 December 2010 and was attended by leading international experts of the liturgical music of Montecassino. Starting from the current state of knowledge, the main purpose of the Symposium was to illustrate the ongoing studies and indicate the most fruitful perspectives of research, highlighting the importance of the sources of Montecassino for the history of medieval liturgical music.

I always wondered, why all reviewers only mentioned one half of my contribution, the one about Beneventan sources, not the other one where I did reconstruct the melody of the Canon by San Nilo da Rossano in honour of St Benedict of Nursia, the one he used to introduce his own Greek community at the Abbey Montecassino.

Is it that they only study Latin traditions or did they not read the whole article?

Reviewers often have to battle against word limits, Oliver, and we must select the essential information. Usually a sentence more on a particular contribution could cause others to be described unfairly partially. Having said so, I am sorry that your paper was not represented appropriately: it is up to the reader to find out more and I am sure it will certainly be the case of your article. Lastly, yes, I personally study only Latin traditions and I believe that to do this properly a whole life is not enough: chapéu to those who can do both at high standards. Best, Giovanni

I always wondered, why all reviewers only mentioned one half of my contribution, the one about Beneventan sources, not the other one where I did reconstruct the melody of the Canon by San Nilo da Rossano in honour of St Benedict of Nursia, the one he used to introduce his own Greek community at the Abbey Montecassino.

Is it that they only study Latin traditions or did they not read the whole article?

Thank you for your kind answer.

I would not have written anything, if you were the only reviewer who did so. Since I am a "reviewer" myself (this month even for two monographic studies), I know that there are many very different ways (I sometimes simply adapt to the expectations of those who ask me for a review). Some do reduce themselves to describe simply, what the authors did, others have the subject in mind, in this case "Music and liturgy at Montecassino in the Middle Ages", and also describe, how the contributors dealt with it. It usually includes to discuss critically all contributions, drawing perspectives for further research. There might be controversial contributions which take more space... probably because they need a more critical discussion than others. It does not necessarily mean that the discussed contributor perceives such a discussion as a privilege (getting criticised is indeed a very lucky case in our discipline, because our "enemies" are the most precious presents we can get, although not everybody understands that they are).

Concerning all reviews of these proceedings, I did wonder about the unfairly partial treatment concerning the Byzantinist and Latinist part of my contribution. Even if you did a review focussed on the topic, there is no justification for it, because the Greek monks around San Nilo and their own community located on the estates of Montecassino were definitely part of the conference's issue. You just abandoned them like did San Nilo (only he did it, because he was disgusted that they did prosper too much, evidently they were not up to his high standards of asceticism, he was well known for his very radical way).

But even if some reviewers think that Latin palæography is enough to understand the music history of this continent (which is the case for musicology all over Germany, and one of the reasons, why German language has no longer any importance in this discipline, I could not imagine that Thodberg would publish his doctoral thesis in a German translation today), I would always recommend to take particular care of contributions from neighbouring disciplines, in this case Latin hymnography, studies of canon law, but also Byzantine studies.

I remember that Thomas Kelly once said to me during this conference that he and other colleagues did integrate Byzantine studies, as if I had reproached him that they did not. It was the first time I got suspicious, but all reviews I read did actually confirm it.

You know that I adore your work, but in this case I see no way to return your compliments.

your reply is illuminating for many different aspects, thank you. I also think that, in the end, it is wholly part of the academic dialogue for reviewers to be then 'reviewed' by authors. And I am glad to have had your direct response.

Of course, you can also just put the titles in a period, and you have the review of Richard Gyug (you find his review also at Viella). The interesting part is the last paragraph, but one might wonder what has he read except the titles, if you read conclusions like these:

Despite the impression that Montecassino was a leader in supplanting the regional culture, it is increasingly clear that the abbey integrated Roman influences with the local musical culture to create a distinctive local idiom.

Although it is true, that Rome was the place, where such an influence could be established (Desiderius was the only Beneventan abbot who became Pope, the other abbots were educated in monasteries close to the current borders of Germany and France), it was definitely not a Roman influence as far as we speak about the liturgical chant.

This is just to tell you, that your review was actually still the best.