Another discovery which may be of interest: a re-used parchment serving as a cover for the 1633-1640 parish register for Cogolin, Var, France (Archives du Var, 7E 45/2), which preserves a large portion of the uppermost voice of the Credo from the Mass of Tournai and the last half of a rhythmicized version of the Credo Vat. I ("du vilage" or "dominicale") which is largely identical to the upper voice music of the Zacara de Teramo setting of this Credo. These concordances were identified by Michael Scott Cuthbert.

Both Credos use black full mensural notation, with minims and plicated breves, albeit notated on four-line staves. (The "du vilage" Credo is followed by a Sanctus which does not appear to use mensural notation.) These Credos seem to have been monophonic adaptations of music from polyphonic settings (though they could possibly have been derived directly from chant sources – but in this case would the rhythms end up being so concordant?).

I am presuming these are from the first half of the 15th century, or so, so I am posting them here. (The ars nova and subtilior group does not seem to be accepting new members... is this a bug with the website?)

The two folios constitute a single bifolio (their lower inside edges appear to be joined in the images), each leaf of which is ruled with eight staves on both sides; music from the recto of each folio continues onto the verso without break, though the two folios are not consecutive. The top margin and part of the top stave as well as the bottom margin and the text corresponding to the lowest stave were cropped when the bifolio was repurposed as a cover, thus the original foliation is unknown. (I suspect the back cover would have been an earlier folio in its original context, since the front cover seems to preserve the point where a collection of Credo settings ends and a collection of Sanctus settings begins.)

The Credo "du vilage," on what is now the front cover, sets roughly the last half of the Credo text (from "factus est. Crucifixus etiam pro nobis" to the end). It is nearly identical, in terms of both rhythms and pitches, to the Zacara de Teramo setting, though one octave lower with note values doubled. Its musical material alternates between that of the two upper voices of that setting, with music being taken from the voice whose verse is texted. In the images available online, the left hand side of the verso is obscured by the folded-over right margin of the recto, but the text break between the bottom stave of the recto and the start of the top stave on the verso can be surmised by comparison with other sources.

The Tournai Credo is on the back cover. It sets a the bulk of the Credo text, from "de deo lumen de lumine" to (roughly) "Et expecto resurrectionem" (with original note values and in the original octave). The handful of lines at the start of the Credo, as well as its final line with concluding Amen, would have been on neighboring pages. The irregular tear along the edge suggests that, like the front cover, this folio's margin, too, was originally folded inward to fit the register, but torn off at some later point in time.

You can find them here on the website of the Archives du Var:

For convenience I am also attaching images to this post. They have been cropped and adjusted slightly in terms of contrast (though the front verso image was only cropped). The front recto image posted here is a composite which includes the portion which was folded-over onto the verso side. Naturally, all images remain © Archives du Var, but are reproduced here for scholarly purposes. 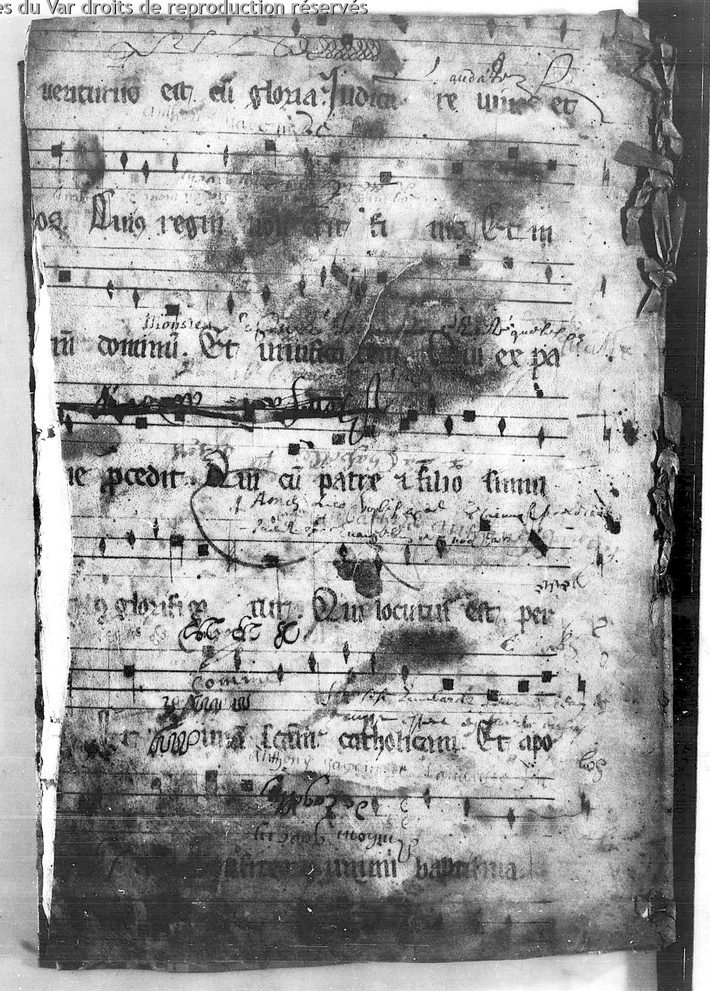