Bibiana Gattozzi has written a very interesting master thesis about the origin and the destination(s) of the 12th-century gradual-proser 35 (please have a look at the announcement with the official link).

The second chapter analyses the manuscript (see also the list of its contents in the first appendix), the third offers a historical overview, the fourth is dedicated to the local mass liturgies for the feasts in honour of St. Vincent and St. Peter.

This discussion may be used to discuss Bibiana's ideas, but also to analyse certain chants of Ben35 in comparison with other local sources.

For practical purposes I insert here the pdf with bookmarks:

I wonder, if it is by chance that all Beneventan graduals are damaged at the beginning, so that we can only speculate about the redaction of the traditional Christmas in Benevento during Desiderius' reform. The exception is the last folio of an 11th century gradual which was added to the end of the 12th-century gradual 35. Bibiana Gattozzi wrote about it (p. 3):

"The last folio of Ben 35 originally belonged to a different manuscript that is now lost: an older, eleventh-century Gradual probably created in Benevento that contained only Old Beneventan chant. This lost manuscript would have been an incomparably precious source of information about the liturgical and musical practices of the Beneventan region prior to the adoption of the international Gregorian chant repertoire if it had survived in its entirety to the present. As it is, folio 202 contains the last part of the chants for Christmas Mass including a partial Credo, the offertory Hodie Christus natus, a Sanctus, an Agnus Dei, and the Communion Dicite pastores quem; it also contains the initial chants for the Feast of St. Stephen, including the Introit Stephanus autem, the Gradual Scribite diem hunc, and the incomplete Alleluia Posuisti." As a little Christmas present, I made a transcription of the Offertorium "Hodie christus natus". According to the tonary of Montecassino (Ms. 318, p. 130, middle column) a simpler version of the same melos belongs to the autentus protus and starts on F. In my transcription of the offertory I inserted the intonation of this tonary and the result is a very odd melos for the tonus protus (probably interesting for Neil Moran's discussion of mesoi?): 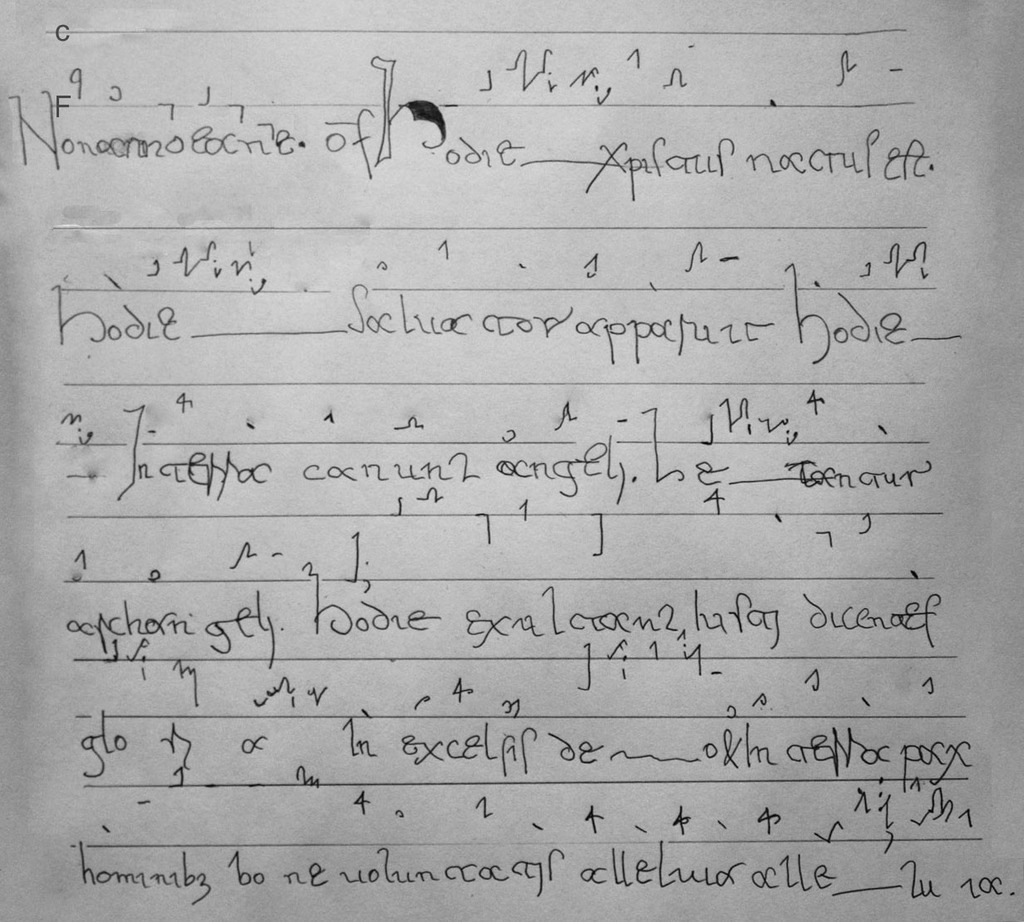 I am very curious about your opinion concerning this melody type. Is it right like this, or should the melody start on C, so that we have cadences on E and a final cadence on D? Or is this offertory in a completely other mode?

I recommend to sing my Christmas present with a slightly modified Protus intonation: 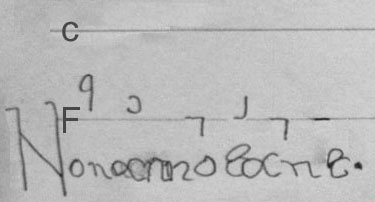 in fact, belongs to the same family as the gregorian magnificat antiphon, being itself a derivation of a byz. troparion. The modal history of the antiphon is rather complicated. It was first assigned to the same mode as the corresponding byz. troparion (authentic deuteros), but this way in the GRE version you had to sing a C sharp. Hence the notation one step lower (instead of the beginning G-AB-B). The original ending on B (now A), was first lowered to F, later on D. The Hartker antiphoner has apparently the melody ending on D, but still assigned to the authentic deuterus (!!).

Well, I first got it wrong, because I oversaw the F key in the tonary of Montecassino (p.130), but all antiphons of this differentia start on FA:

It is hardly readable, but the differentia of the psalmody (end of the left column) seems to be on SOL and the custos on FA (because it refers to the beginning of the antiphons):

The text was probably used here for an ingressa of a Christmas mass. First, I transcribed F as D.

If I understand you well, you would like to interprete the SOL cadence as Protus and the LA cadence as Deuterus, so that you have to intone the b (SI) permanently as b fa? This would suggest that the Protus intonation ends on G re (with the first species of the pentachord between G-d), and the temporary use of c sharp  would cause a change to the chromatic genos of the phthora nenano (μεταβολή κατὰ γένον), which is possible in the melos of echos plagios devteros (ἦχος πλάγιος τοῦ δευτέρου).

It is a very nice idea, though it contradicts the classification of tonary of Montecassino in which the SOL cadence is Tetrardus (corresponding to the differentia), and the LA cadence probably Protus or at least its repercussa.

Is this your proposition? Or do you mean that the Beneventan cantors (like the Frankish) corrupted all cadences on LA re, which were supposed on SI mi originally?

in fact, belongs to the same family as the gregorian magnificat antiphon, being itself a derivation of a byz. troparion. The modal history of the antiphon is rather complicated. It was first assigned to the same mode as the corresponding byz. troparion (authentic deuteros), but this way in the GRE version you had to sing a C sharp. Hence the notation one step lower (instead of the beginning G-AB-B). The original ending on B (now A), was first lowered to F, later on D. The Hartker antiphoner has apparently the melody ending on D, but still assigned to the authentic deuterus (!!).

not quite. Original : G-A-B-C  and at ONE place (the last hodie of the gregorian version, the one with a quilisma) B-C#-D. Then again B-C.

When transposed on F we have : F-G-A-Bflat and later A-Bnatural-C. I don't care a lot for the later modal classifications. It is current to have pieces ending on G with B-flat classified as tetrardus. Besides this, the original ending was on the major third (here A): this ending on G simply adds one step to the downwards moving of the finalis (I already noticed F and D, now we have G). The BYZ original (look for it in Eastern Elements in Western Chant) and Hartker are very clear: it IS an autentic deuterus. The beneventan version requires a steady b-flat and skips the b-natural at the crucial place (b-natural = original C#), although something is not clear (there IS a typical beneventan protus cadence on "in excelsis DEO"). The staffless manuscript is not very precise (and it could very well be transcribed on G-B).

Are there any other suggestions how to reconstruct the melody of the Old Beneventan offertory "Hodie christus natus est"?

Thank you very much for all your suggestions and contributions and please apologize my late answer, which was mainly delayed by other contributions related to our discussion here. I agree with you so far, that the melos and its mode is based on the lowest degree, while the second degree is the finalis. As I already said, I have not any problems with the concept of finalis among Latin theorists between the 9th and the 11th century, whether they were cantors or theorists concerned about Western plainchant.

Concerning your suggestion of a Byzantine origin, I just insert here the bibliographical reference, so that everybody can follow us (if you have time, a quotation of the "origin" would be very useful to follow better your ideas, at least the exact folio of the Hartker Antiphonary):

If you like to compare the offertory to the practice of the recitation of psalms and the biblical odes (because the magnificat was part of the 9th ode, certainly not a troparion), I wonder why you do not leave the melos untransposed and refer it simply to the psalmody of echos varys (Plagi Tritus) which sometimes end on FA, but on SOL as well.

This would be a transcription, which might fit as well to the incipit in the Montecassino tonary, but it is also a much simpler solution and a melos which was quite remarkable (at least concerning a certain faible for the mainstream among some colleagues), but not unfamiliar among cantors of the region (please have a look to the Sanctus trope of the Processional of the Abbey St. Dominic of Sora).

The only question is, why cantors of Montecassino decided to classify this melos as a kind of Mesos protus. During the discussion of the tonaries, which had a prominent role in the chant transmission during the Cluniac reforms, we found together that this melos (as example the offertory "Inmittit angelus") was usually classified as "Plagi tetrardus", in one tonary of the alia musica compilation as "Autentus tritus". Was it the prominent use of b mi, the use of b diesis (corresponding to E diesis) for the mesos cadences, and the temporary use of b flat for G cadences, as we could study it in the tonary of William of Volpiano (Montpellier H 159)?