https://gallica.bnf.fr/ark:/12148/btv1b6000370c/f158.item.r=Recueil%20de%20fragments%20de%20manuscrits%20français
Folios 79 and 80 in this volume contain fragments from a 14th century musical manuscript.  Each contains the lower half of a parchment folio with black Ars Nova mensural notation (including red coloration). Music written in a combination of both 1- and 2-column formats.
79r: 3vv Latin motet with isorhythmic tenor on "Super omnes speciosa" (Marian antiphon "Ave Regina coelorum") - however this is NOT Machaut M17. Only last part of the motetus and triplum parts are preserved.
79v: 4vv mixed French/Latin motet with isorhythmic tenor ("Ave") and contratenor (untexted). Lower voices are complete and include instructions about repetition/diminution of the color. Only the last part of the motetus and triplum are preserved.
80r: 4vv French motet with isorhythmic tenor ("B[...]") and contratenor ("Ad ortum"). Only the last half of the motetus is preserved. Fragment lacks triplum (which was probably on a facing page).
80v: 3vv French motet with tenor part texted in its entirety: “Ay amours trop…”  Tenor voice is complete; only the last part of the motetus and triplum are preserved. (Triplum text ends “... qu'il puisse soufrir les biens qu'amours puet donner.”) 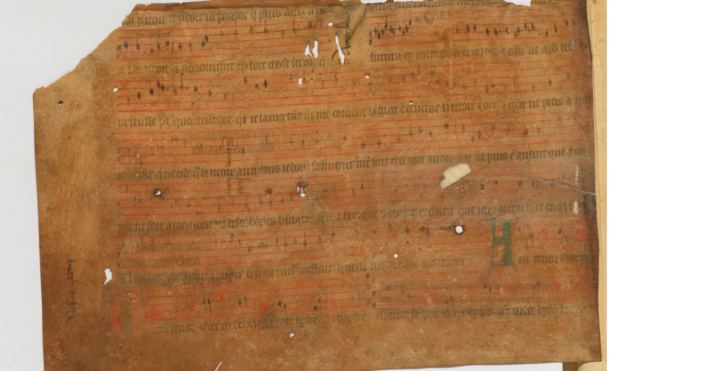 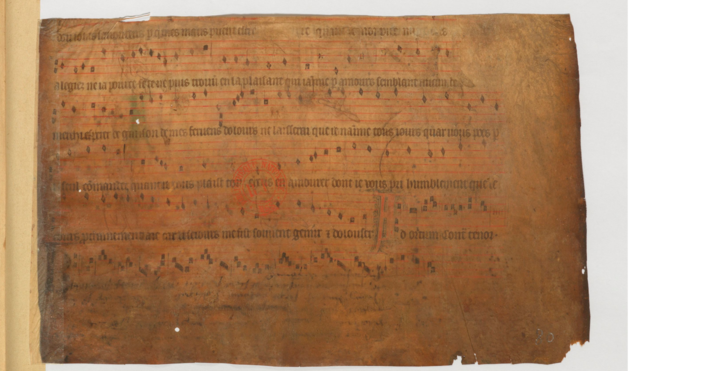