Dear friends, I would like to present to you two books by Bulgarian researcher musicologist and professor of music history Klara Mechkova.

Over the last decade, she has published two books on Tetraphonia and Triphonia as the major systems of Byzantine music.

The Oktaechon System of the Byzantine Music in the Theoretical Text... 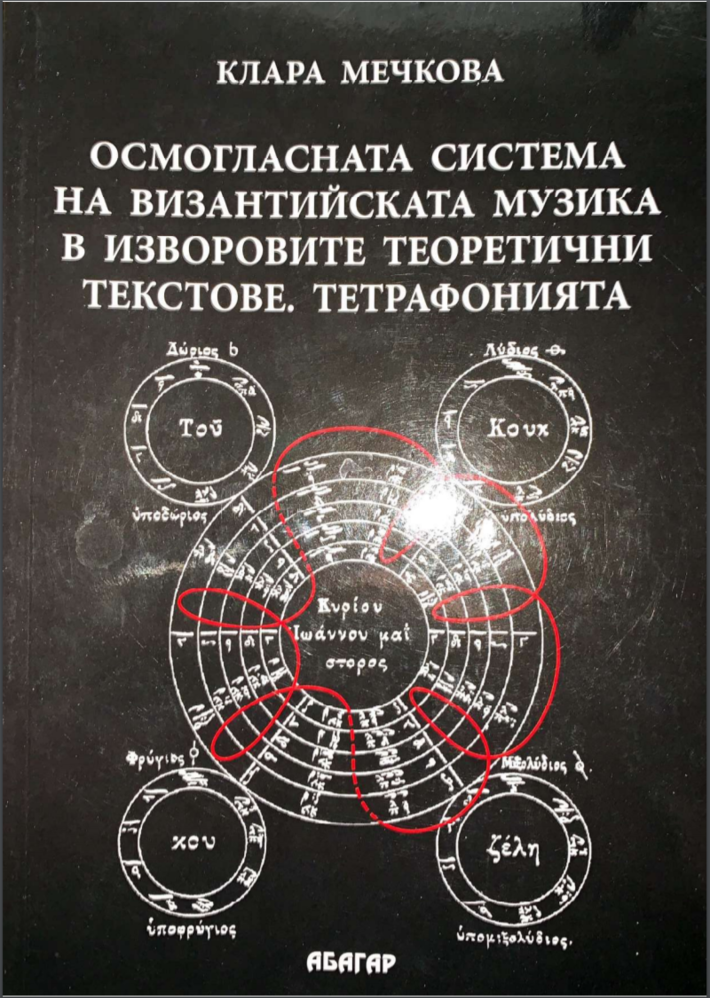 1. The Oktaechon System of Byzantine Music in the Theoretical Text Sources. The Tetraphonia (2009). The book follows strictly the medieval Byzantine sources. The researcher examines in detail key issues of Byzantine music theory, makes a detailed and in-depth analysis of the St. John Koukouzeli's wheel (Τροχός). Klara Mechkova pays special attention to terms and issues such as φωνή, ήχος (functional theory of the echoi), the discrepancy between the order and naming of the Ancient Greek scales and Byzantine scales, the relation between music and theology in the medieval Byzantium.

The Triphonia in the Tetraphonic Musical System and in the Life of ... 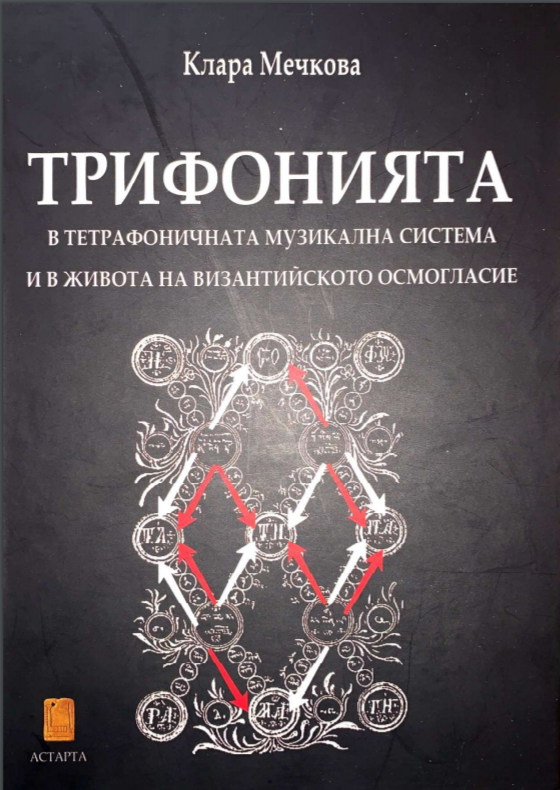 2. The Triphonia in the Tetraphonic Musical System and in the Life of the Byzantine Oktaechon (2018). The book is a continuation of the first with an emphasis on the Triphonia as a subsystem of Byzantine music. The author makes a detailed analysis on the graphic of John Plusiadinos (Η σωφοτάτη παραλλαγή). Also, in this book she translates and analyzes the δοξαστικό Θεαρχίω νεύματι by various Byzantine sources. She pays special attention to terms such as φθορά, νανά, λέγετος, νενανώ and others key concepts. The question about the tonal system is also addressed in this book. She mentions the testimony of Chrysanthos about the three types of tonal intervals and traces the connection with the sources of Arabic music in the Middle Ages. It suggests that Arab musicians may have borrowed the idea of the intervals from the medieval Byzantium (there is no direct evidence, so this remains only a scientific assumption and hypothesis).

Klara Mechkova's research focus is on the musical systems, functional analysis, and the way these major components of music work, following strictly Byzantine music sources. In addition, she has deep knowledge and gives credit to the Three Teachers' reform. On one hand, she traces the continuity between medieval Byzantine music and the music of The Modern Times (the Three teachers' reform). On the other hand, she does not make the mistake of fully identifying or completely negating any connection between the Middle Ages and Modern Times (as many Western researchers make).

Unfortunately, Klara Mechkova's books are only available in Bulgarian for the time being.

All this with the Latin reception and the ancient music is exactly like that. This is a well-studied subject and it is useful to know. There is something else. Before to compare, you have to have a deep understanding and knowledge for what you comparing to. The Byzantine musicians have created their own system, unique terms and concepts, unique understanding, intervals, everything is different and special, even the order of the scales and their name comparing to the ancient scales. Everything is different! We must first answer why they did this. Were they stupid for not knowing ancient music and Latin reception? No. Of course, they knew it, but nevertheless they created something unique and it must be studied as it is, respecteing it's uniqueness. This tradition must be respected. And when we use Chrysanthos treatise as a source for the Byzantine music, we must be very careful and take into account the global historical context in which he works. And this is the context of the "Balkan Renaissance" and the influence of The Modern Times.

This is what I am calling for. To be respectful to the sources.

I think we must compare both receptions in Latin and Greek.

In Greek there is a difference between harmonics and chant manuals like:

A direct explanation of harmonikai terms with psaltic art developed during the 15th century. The term τὸ τετράχορδον was used by Ptolemy or any other author of harmonics, in the Papadike the term triphonon is more common to speak about the phthongos which is three steps above (and three steps span over all four elements). It is important to understand that the exact order or permutation does not matter (which is my constructive criticism of Oliver Strunk’s Byzantine tonal system which starts the history of Byzantine music with the Papadike).

In the Latin reception we have (during the 6th century) Boethius very original and creative translation of Ptolemy and thanks to it the whole Greek terminology was available in Latin.

Tonus (derived from τόνος) became the term for church tone, while the Greek manuals use ἦχος (voice), a term which had not such a meaning and hardly existed in harmonics. ἡ φωνή does exist as well in Latin theory (in the so called "Klangschrittlehre", treatises about tone steps), it was translated by vox, while ἦχος with a very similar meaning was translated "sonus".

During the Carolingian renaissance, whether in Aurélian of Réôme, Johannis Afflighimensis, Musica and Scolica enchiriadis, or Hucbald of Saint-Amand etc., most of them discussed the echemata (the eight tones and their intonation formulas) by the use of this terminology.

Tetrachordon was not a new term of Chrysanthos he referred to Ancient Greek terms of the harmonikai (in English harmonics). And what I described with parallage was in fact another important category of harmonics: τὰ συστήματα (the tone systems which should not be confused with tonal system, because the latter can employ mor than just one).

I'm glad the topic is of interest to you.

In my opinion, Klara Mechkova's research is revolutionary for the Byzantine musicology. I hope that her books will be published in English someday.

But I want to make one clarification that seems important to me. The Wheel (Τροχός) is not just a παραλλαγή exercise. It gives much more information. This is a treatise, a complete treatise on the Byzantine musical system. It describes the κύροι and πλάγιοι ήχοι, their position (registers) and the magnitude of each φωνή in ascending and descending direction. In the time of St. John Kukuzel, the music sources did not use terms such as tetrachord, pentachord, and connecting tone (διαζευγμένος τόνος) as Chrysanthos did. There is no τόνος in the Byzantine era. The fundamental element is the φωνή. Tetrachord and pentachord etc. are terms from another era, from the era of the Modern times and The Three Teachers. If we are strictly following the Byzantine musical sources, they speak about φωνή, τετραφωνία and τριφωνία, and these concepts are fundamental for the organization of this music. Everything else is depending on them. Also, they are unique for the Byzantine music and we must keep respect on them. Mixing terms from different ages does not favor us, it leads to confusion and misunderstanding of this music.

Please excuse the long silence, although I promised you to write you here.

I am looking forward to meet Klara in October, hopefully in Sofia. Her subject is very close to my doctoral thesis whose viva was in 2006. It seems we both made the same mistake to publish it in our native language. Mine never got any reviews and due to the unsatisfactory cooperation with the informatic department of the Humboldt University which is also responsible for digital publications of master and doctoral theses, I was forced to publish mine in micro fiches. Nobody reads them nowadays, just another obstcale more apart from the language...

But in my own work I also started to discover the very important and dominant role of tetraphonia, also called the trochos or "wheel" system, which is the natural result of polysyllabic parallage (a solfeggio based on echemata) which is simply the continuous sequence of the four elements of the tetrachord, since they require four steps (thus, they are always separated by a whole tone called diazevxis).

But the wheel is just one system of parallage, we have others as we can see now, since the National Library in Athens has now published many of the most precious manuscripts. See my description of the Akolouthiai:

There is a certain evidence that triphonia (the dominant tone system in Slavic sematic notation called znamennaya notaciya) developed out of the kondakar’s and its own Kondakarian notation, but this is a very particular discussion which has been widely ignored (even among Byzantinists or Byzantine musicologists).

Thus, I expect we will find our way back to it, soon.