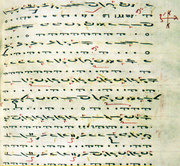 This group (like any other one I opened) is dedicated to the comparative research between liturgical traditions. Concerning the subject of the Byzantine heritage of Orthodox chant, methodologies in this field were always forced to be comparative, because the nature of all the different neumes used by notators of Eastern Chant (Armenian, Georgian, ekphonetics, Byzantine notations developed between Antioch, Jerusalem, Sinai and Constantinople, the Slavic notation and its own tonal system etc.) was always to make a difference from the background and the foreground of realisation which was called the "thesis of the melos" in Greek terminology.

I wish not to discuss, if the Coptic tradition was based or influenced by the Hagiopolite oktoechos or not, I just would like to emphasise that this group is open to treat the subject of Coptic and Ethiopian chant as well, as any other Christian tradition of the Mediterranean, including its various exchanges with close Sephardic, Kurdish, Sufi and berber traditions. It does not exclude any tradition without any regard whether it developed dependently or independently of the Byzantine and the Ottoman empire.

Any language is welcome (including Slavonic languages and Greek or any other language), in my experience English is very important to discuss the meaning of Greek terms, and how they were translated and transferred into various languages. It includes all living traditions (also those of Old Believers) and all questions concerning their past back to the earliest tropologia (Iadgari, Šaraknoc', Tropligin), papyrus fragments and lectionaries. This is data from Mount Athos Repository LINKManuscript No: 0074…Continue

Catalogue of the Greek manuscripts on Mount Athos by Spyr. P. Lambros online

Catalogue of the Greek manuscripts on Mount Athos /Edited for the syndics of the University Press, by Spyr. P. Lambros.2 volsOnline on Digital Library of Modern Greek Studies, Anemi…Continue

Nikola Antonov with Gregorios Papaemmanouil, Archon Protopsaltes at the Patriarchate of Alexandria, at the klir of the Rila…Continue

Dear friends,I look for a song from MS Iviron 1203ΘΡΗΝΟΣ ΣΤΗΝ ΑΛΩΣΗ ΤΗΣ ΜΠΟΣΝΑΣ (Lament For The Conquest Of Bosna).Can you help me to find it in original notation?THANK YOU!!!Continue

The microfilm of the Bibliothèque nationale, fonds Coislin manuscrit 220. “Coislin notation” was called after this manuscript. The black-and-white reproduction of the film is online since more than a year, but I will soon describe other manuscripts…Continue

Sephardic recitation of the Torah and the Pentateuch

I thank Frédéric Tavernier-Vellas for communicating the following link, where you can listen and download mp3 files of field recordings made of famous hazzanot:http://parachat.free.fr/Continue

You need to be a member of Byzantine chant and all Oriental, Caucasian and Slavonic liturgies to add comments!

Please sign the petition “Save the Monumenta Musicae Byzantinae”

See also the Blog entry about the campaign: